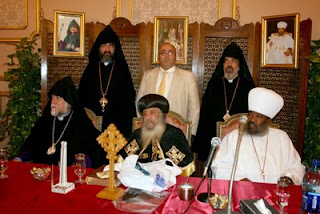 On 13 July 2007 H.H. Pope Shenouda III and Abune Paulos, Patriarch of the Ethiopian Orthodox Church signed a Common Declaration in St. Mark’s Cathedral in , marking the end of a period of strained relations between the two Patriarchs. The reconciliation was facilitated through the fraternal co-operation of His Holiness Aram I, Armenian Catholicos of Cilicia, who had earlier met with Patriarch Paulos in , who greeted both Pope and Patriarch with the words, “You have made history ….. This is a historical day.”

Relations between the Ethiopian and declined suddenly in 1994 as a result of Pope Shenouda’s willingness to support the Eritreans in their desire to have independence from the . Both ecclesiastically and politically Eritrea was part of Ethiopia, but the overthrow of the Empire and rule of the Communist Dergue which seized power 1974-1991 led to persecution of the church and civil war with Eritrea, which declared itself separated from Ethiopia. In April 1993, following a referendum, gained its official independence as a state whilst the local church, supported by the government, asked Pope Shenouda for support in establishing an independent . During the troubles, he had already assisted Eritreans in the diaspora by consecrating Bishop Makarios for the Eritreans in the and Marcos for those in in May 1991.

Under the terms of the Protocol of June 1959 the Metropolitan of Ethiopia was raised to the dignity of a Catholicos-Patriarch, which was the position when Abune Paulos was enthroned in Addis Ababa on 12 July 1992; but in 1994 a new Protocol was agreed by which the Coptic Church recognized the full autocephaly of the Ethiopian Church with her Primate enjoying full Patriarchal status. Immediately following this the protested at the grant of independence to the Eritreans and for the past thirteen years relations between the two churches have been strained although communion between them was never broken.

The reconcilation was also welcomed by Dr. Samuel Kobia, General Secretary of the World Council of Churches, who sent his greetings to the three Primates quoting from Psalm CXXXIII:1, “Behold how good and pleasant it is for brethren to dwell together in unity.” After recalling that both the Coptic and were founding members of the WCC, he noted that Pope Shenouda had served as one its President from 1991-1998, Patriarch Paulos was currently a President and Catholicos had served as Moderator of the WCC Central Committee for two terms from 1991-2006. Dr. Kobia spoke of them as both being deeply rooted since the beginning of Christian history among the people of . “We rejoice with this promising news that extends far beyond bilateral relations by confirming that true reconciliation among churches is possible. We are grateful to each of you, the heads of churches, for the tangible witness you have offered in dealing successfully with church-dividing matters.”

The text of the Joint Declaration is as follows:

We would like to emphasize the importance of this historical meeting in which we reaffirm our unity of faith that, for centuries, has been the basis of our common doctrinal position and theological teachings. Deeply rooted in the Holy Scriptures, the Apostolic Faith and Tradition, the three Ecumenical Councils ( 325, Constantinople 381 and 431) and the teachings of our Chur5ch Fathers, especially St. Athanasius the Great, St. Cyril of and St . Gregory the Illuminator, our unity has sustained the life and witness of the Churches of the Oriental Orthodox Family becoming a living source of spiritual strength and missionary engagement. For the Oriental Orthodox Churches, the full communion and the visible unity of churches are based on the unity of faith which is manifested through Eucharistic communion and other Sacraments of the Church.

Pope Shenouda III and Patriarch Paulos would like to express their deep thanks to His Holiness Aram I for his fraternal efforts to bring this historic meeting into reality, hoping for him a safe journey back to Antelias-Lebanon, after his important visit to Addis Ababa.

After signing the protocol of the relations between the Coptic Orthodox Church and the Ethiopian Orthodox Tewahedo Church in April 1994 by the heads of these churches through the approval of both holy synods, no meeting was possible to take place between the two heads since that time. Also, the Joint Commission did not continue its work after signing the protocol except during the short visit of the Coptic-Armenian delegation last month from and Antelias to . Both churches are looking forward to the continuation of their historical relations with the pastoral services and doctrinal teachings. Convening a Joint holy synod is possible in fulfillment of the articles of the protocol.

Pope Shenouda III and Catholicos extend their congratulations to His Holiness Abune Paulos on the occasion of the 15th anniversary of his enthronement as Patriarch of the .

Patriarch Paulos and Catholicos I would like to express their thanks to His Holiness Pope Shenouda III for his warm hospitality.

May the peace of our Lord Jesus Christ be with all the faithful of our Churches.

DIALOGUE WITH THE ROMAN CATHOLIC CHURCH